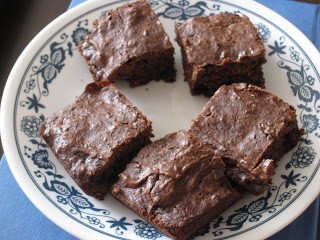 This bizarre experiment stemmed from two emotions I experienced on a lazy Saturday afternoon.

One was the insane craving for chocolate. Sometimes I temporary silence this craving by eating a handful of chocolate chips usually reserved for baking, but this day was not the case. On my trip to the kitchen, to the baking cupboard, to the large bag of chocolate chips usually only reserved for baking, my Ghirardelli brownie box caught my eye. And I remembered that I still had one pack left of brownie mix.

Two was the sad and lazy realization that I had used up the last of the eggs the night prior, making muffins. I needed exactly one measly egg to make my beloved brownies and to cure my raging chocolate craving, otherwise the large bag of chocolate chips was going to get it! I didn’t want to go out and get eggs, see as how it was pouring rain outside. There had to be a better substitute! I turned to the internet for help. 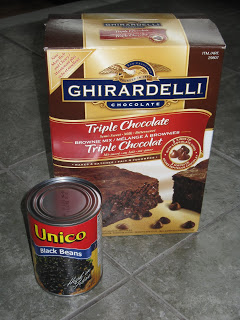 I searched through a lot of helpful substitutions, such as mayo (we had none), eggs whites (if I had egg whites, I wouldn’t in this predicament, would I?) and canned pumpkin (must try later when canned pumpkin is on sale). I was almost about to use a convincing sounding baking soda and applesauce mixture when I clicked on a forum where someone raved about their black bean brownies. What got me more was that they even said they used the Ghirardelli brownie mixture I was about to use. I was sold. 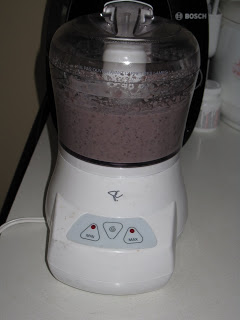 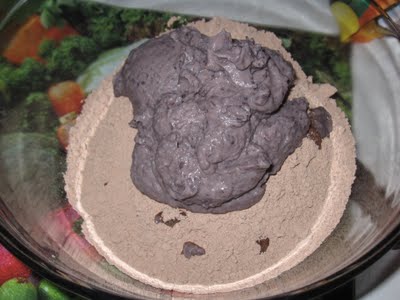 I started to get cold feet when I was spatula-ing out the pureed black beans onto my dry brownie mixture. There was no turning back now, I had black beans in the brownie mix. Then the paranoia set in: What if this turned out terrible? Was I insane for possibly wasting a precious batch of my favourite brownie mixture? I’m not a big fan of wasting food, so even if this tasted terrible, it would somehow have to be eaten. Unless it tasted really, really bad. Then I would feel major remorse throwing it in the trash. 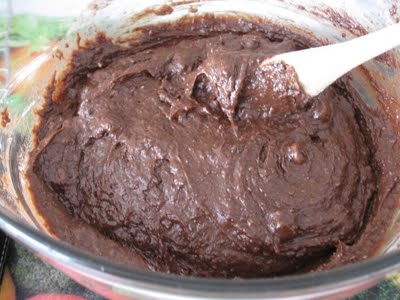 Mixing the pureed black beans and dry brownie mix was a little odd at first, as it seemed that there was not enough wet mixture to go around and that I was just going to end up with very dry brownies. Eventually, the beans spread out and mixed with the dry ingredients and I had a very thick brownie mixture ready to go into a pan and into the oven.

I was also concerned 10 minutes after I put the pan in the oven because the smell of baked beans began wafting around the apartment. Did this mean that the brownies were going to have an obvious baked bean flavour? I didn’t want that at all! All I wanted was to tame my current chocolate craving. Was I being punished for my laziness? 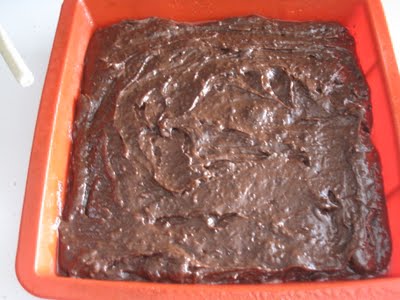 The box says to cook the brownies for about 45-50 minutes, but my paranoia told me to check early and I’m glad I did. The brownies were ready at 35 minutes and because of the lack of eggs in the mixture, no real rising was involved. A quick toothpick in the middle told me that it was done and I set it to cool on an iron rack. I’m not going to lie, they look and smell delicious, even if they seem a little on the dense side.

(By now I had already caved in and had a handful of chocolate chips from the baking cupboard mostly out of nerves).

When I started the cut the brownies into squares, I noticed they seemed a little harder than usual. The tops were a little on the crisp side, as were the edges. 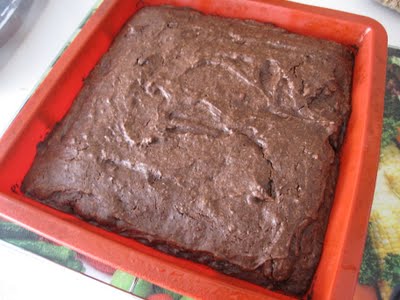 Finally, it was the ultimate test – I took a large piece and bit into it.

I can safely and honestly say that you cannot taste the black beans in the brownies. This was a huge relief, especially since my apartment still has a slight baked bean smell. The chocolate completely overshadows the beans in the mixture and the result is still a delicious, chocolaty brownie. However, these brownies aren’t as moist or spongy as the original mixture. I found the texture to be more like a chocolate cake than a brownie. Dare I say it, the brownies tasted healthier.

Now I’m secretly wondering if it made a difference that I rinsed the can of beans? I only did this out of habit due to the insane amounts of salt that are usually in canned beans. Maybe I should have just pureed it as is and then they would have resulted in moister, if not saltier brownies?

PS: As a final note, I’ll admit that after eating two brownies, I was stuffed. Maybe that’s why dieters love this brownie recipe – the fiber in the beans fill you up and make you less likely to finish off the rest of the pan.